Malinda Perera is a Sri Lankan comedian born and raised in Colombo. Having lived in Sri Lanka and Malaysia, he decided to move to Austria after figuring out it is the only country you can have sex in a subway (not the sandwich place).

Since taking the stage for the first time in 2016, Malinda has been exploring and observing his inter-cultural experiences in a funny way. In 2021 Malinda moved to Dublin, IE to continue performing stand-up comedy and within the short period he has been in Dublin, he has performed at many prestigious comedy clubs in Ireland. 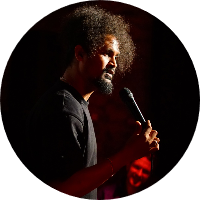